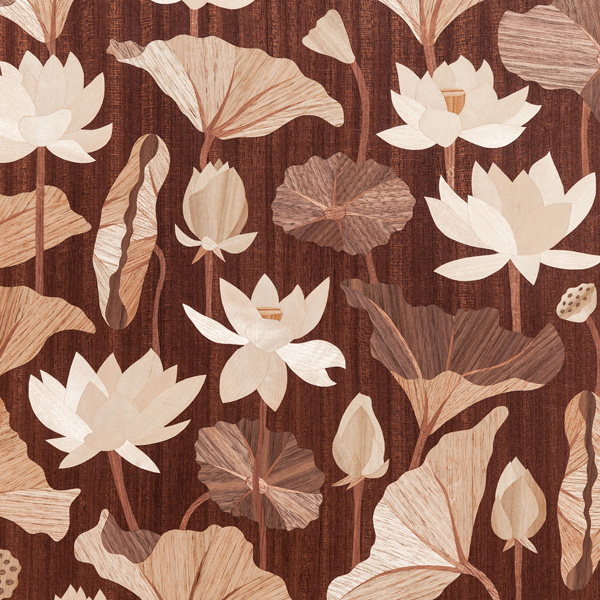 MOKUZOGAN is a craft. A piece of wood is used as the base. Shapes are cut out of the wood to create a design, then different kinds of wood are inserted into the cut-out shapes. This highly precise process is repeated over and over to gradually create an image.

MOKUZOGAN has a very long history and is thought to have originated in Damascus, Syria, which is the heart of Oriental civilization. The oldest existing example of MOKUZOGAN can be seen in a stool that was one of the objects in King Tutankhamen’ s tomb from 13th century BC Egypt. After that, MOKUZOGAN gradually spread around the world over the course of many centuries, with the technique being handed down and developed in different parts of the world.

MOKUZONGAN arrived in Japan from the Silk Road during the Asuka period. Artefacts/ An artefact created during that time are/is kept in the Shosoin treasure house.

These days, the MOKUZOGAN items that are made in Japan are created using equipment known as a jigsaw machine and the predominant method is one of cutting the shape out. The main feature of this method is that it makes mass production possible. However, as this method uses a machine, the size of the piece that can be produced is limited. It is not suitable for the products of large works.

Akio Shimada’ s MOKUZOGAN pieces are created using a craft knife (design cutter), which is a European method. Shimada works by hand to cut the shapes out of the wood, adding his own original techniques into the mix. These works are created by cleverly bringing out the texture of the wood, working with nothing more than its grain and color. They bring us the beauty of wood, expressed through many hours of careful work.

In order to be able to express the intrinsic character of the wood, aesthetic sense in selecting the right material and fine craftsmanship both go into the final work.